This page was initially compiled by Karen Lee Allen (The Parrot Lady) and Dr. Walter Rosskopf in layman's terms in order to help you understand "vet-talk."

Please feel free to submit terms you don't understand or would like to see listed. We'll do our best to assist.

Acinetobacter
One of the gram-negative pathogenic (disease-causing) bacteria. One of the mildest pathogens.

Anaerobe
An organism that grows without air. Some are very nasty. Example: the clostridium that causes gangrene is an anaerobe, many are harmless, however.

B.U.N.
Measure of kidney function in dogs. Measure of muscle breakdown in tortoises. No value in birds.

Belisa
A Psittacosis serum test that shows exposure to Psittacosis in the last year. May or may not mean infection. Bird may be immune. This test has been discontinued as it showed most birds to be positive.

Bile Acids
The only specific test for liver disease in birds.

Catobolizin
Breaking down of own muscle or other tissue. Usually associated with malnutrition or semi-starvation.

Chlamydia
The organism responsible for Psittacosis.

Coccidia
A one celled protozoa that can cause diarrhea in dogs, cats and birds.

E-Coli
A common gram negative pathogen in birds. (Normal in mammals but many strains can cause disease)

Elisa-A
Fluorescent antibody test that detects Psittacosis shedding. Psittacosis positive birds shed the organism only about 12% of the time, so negative does not rule out Psittacosis.

Enterobacter
A gram negative pathogen. One of the milder.

Eosinophil
A white cell elevated with parasites and allergies and tissue inflammation in cockatiels.

F.E.L.V.
Feline Leukemia Virus (or vaccine), responsible for an AIDS-like condition in cats and other cancers.

Fecal Float
Fecal test that floats worm eggs so they can be seen under a microscope.

Heterophils
The main white cell of a bird or reptile. Fights disease and eats bacteria.

I.P.
Into the abdomen.

Klebsiella
This is one of the nastiest of the gram negatives. Claforan is usually the best antibiotic.

Leukocyte Morphology
Refers to the structure, good or bad, of the white cells. Gives an idea of how sick the bird is.

Malaria
Any of the blood protozoan such as hemoproteus, plasmodum, leukocytozoan, trypanosoma, etc. Does not refer to blood worms, conciofiliarie.

S.G.O.T. a.k.a. S.A.S.T
An enzyme found in multiple tissue as liver, heart, muscle, etc. Serum glutamic oxgloacetic transaminase mainly in the liver. Used as a liver test in birds and reptiles.

Shigella
A particularly nasty gram negative that can make animals and man sick. In man, rip-roaring diarrhea. Can kill.

Subclinical
Disease below clinical level. Bird is ill but not showing signs.

Titer
A measure of antibody formation. See systemic above.

Toxic
Toxicity of cells. As toxic heterophil is "sick" from fighting disease, toxic refers to being poisoned. Detoxification refers to removing toxin.

Toxic Heterophils
Heterophils that are sick from fighting diseases, usually means a serious problem. This would be a bad sign and an example of abnormal leukocyte morphology.

Tri Chrome
A special test for Giardia and other protozoa. Suspends the parasites making them easy to find.

Xanthomas
A strange benign tumor made up of fatty cells. A substance we can often associate with hypothyroidism, subclinical and clinical illness. 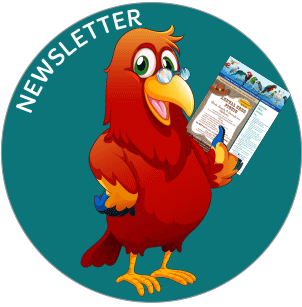